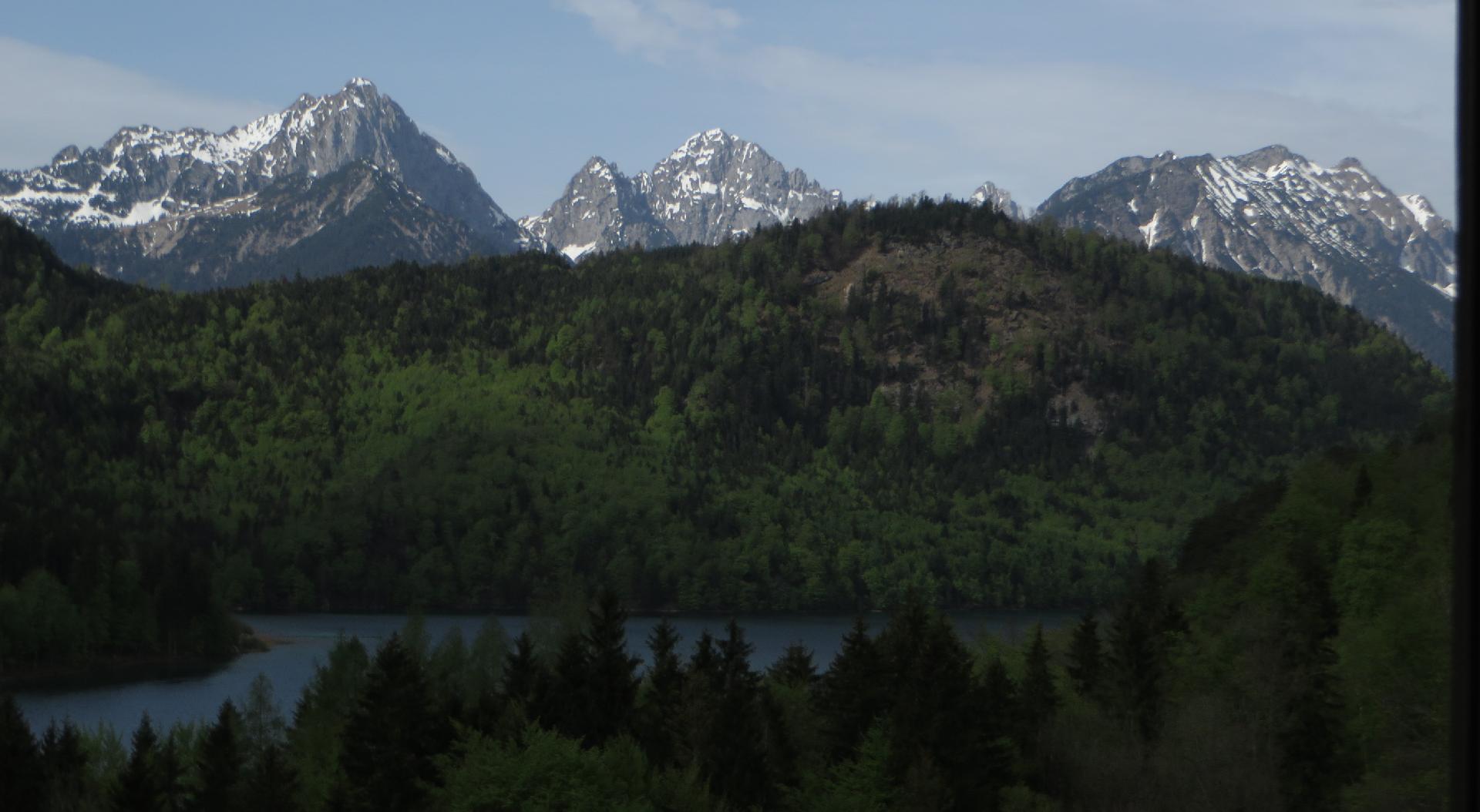 We've just returned from spending two weeks exploring Germany. Overall, we had an amazing time, seeing a pretty decent swath of the country. We flew into Berlin, stayed a few days, then rented a car and gradually worked our way down to Munich. Spent a few days there, then took the train back to Berlin, before flying home again.

We awoke the following morning to somewhat nicer weather (the sun was attempting to come out). We departed Rothenburg, and continued our drive southward into Bavaria. Our first stop of the day was in the city of Nürnberg, at the old Nazi Party Rally grounds (and now museum). The unfinished New Congress Hall building had been partially converted into a museum, documenting the Nazi party's rise to power, their impact on Germany, and how the rally grounds were used. The museum included another audio walking tour, which was particularly useful as many of the museum exhibits were not translated from German. The size & scope of the building is vast, even in its incomplete state. The museum was quite informative, if a bit dry. However, it was still an interesting piece of history.

After the museum, we headed back onto the autobahn for a bit, with a bit of a detour to the rural town of 'Hellenbach'. The name of the town is a bit of pun (in English), and our interest was purely to say that we had been to hell and back. There was literally nothing at all to see in the town, as it was completely surrounded by farm land, and only had maybe a dozen homes.

Following a fuel & lunch stop at a completely uninspiring autobahn rest stop, we continued driving south, all the way to the town of Füssen, just north of the border with Austria. We were now in the heart of what most people think of as classic Germany, with the Alps, lakes, and castles. The guesthouse where we stayed was on a hillside just above a lake, with the snow covered alps in the distance. It was absolutely gorgeous. Even the window of the bathroom in the guesthouse had amazing views. We wandered around the lake front for a while, and had a nice dinner. On the way back from dinner, we stumbled past a vending machine which had local dairy products in it. Yes, yogurt, cheese, & butter, all in a vending machine. We figured, it would make a good breakfast the following morning (and it was).

In the morning, we got up early, checked out of the guesthouse, and drove into, and through town to get our (reserved) tickets for the castle tours. First up was Hohenschwangau Castle, and then later in the morning, the famous Neuschwanstein Castle. Each castle was not terribly far from the other (less than 2 miles apart), however they were on hillsides on opposing sides of the valley. On top of that, we had to walk from the car, to the first castle, then back down the hill and up to the second castle. It was a good bit of exercise, and the views were amazing. The castle tours were decent, but it was actually seeing the castles that was the primary interest, much less than whatever the tour guides had to say. It was definitely worth it, as the castles were absolutely stunning, and over the top in every way. Following the tour of Neuschwanstein, David & I hiked a bit further up the mountain to Marienbrücke, the bridge over looking the castle & valley. On one side there was a triple water fall, coming off the alps, and on the other side was the castle, and then the entire valley spread out before us. After that, we hiked back down, and met up with Denise for lunch at a surprisingly decent cafe just below the castle.

Following lunch, we walked back to the car, and drove about an hour northeast around Munich, to the tiny town of Rumeltshausen, to set us up for the next day's activities. We checked into the guesthouse, and then explore the town for a bit. There was literally nothing at all in the town, beyond farm houses and farm land in all directions. Despite that, it was quaint & charming, and peaceful. As there was absolutely nowhere else to go (without driving), we had dinner at the guesthouse. This was quite the pleasant surprise, as a number of locals wandered in for a drink and/or food. The (German) food was quite good (and surprisingly inexpensive), and the Maier Brau beer was quite possibly one of the best that we had in the entire trip.

The next morning, we checked out, and drove about 30 minutes to the infamous town of Dachau, to the site of the https://en.wikipedia.org/wiki/Dachau_concentration_camp">Dachau Concentration Camp</a> (now museum & memorial site). We knew that this would be a profoundly unpleasant experience, but going to Germany and not visiting one of the sites would have been a mistake. It was bleak, but the museum (and the grounds & sites) were all very well presented. Interestingly, we had some of the worst weather of the entire trip that day, with strong winds and a steady down pour the entire time we were there. We spent nearly 3 hours having one of the most sobering experiences of the entire trip.

After lunch, we drove about another hour east to the small city of Erding, the home of the Erdinger brewery. We had reservations for their brewery (and tasting) tour that night. However before the tour, we went to dinner at the Erdinger restaurant, and had an absolutely fabulous meal. Both the food & beer were possibly the best we had in the entire country. The amazing beer find was their Urweisse, and the highlight of the meal was this pretzel soup which was fantastic (salty, comforting and rich). After dinner, we drove to the brewery itself, and went on the tour. It was a really nice tour, showing us the entire production process, and included pretzel, sausage & beer tasting.

The following morning, we had breakfast, checked out of the hotel, and drove into Munich proper. Traffic was kinda crappy, and what should have been 30-40 minutes took nearly 90. We dropped off the rental car, walked a few blocks to the subway, and took it up to BMW Welt(World), for the factory tour. This tour is famous for being one of the best industrial/factory tours anywhere in the world, and it did not disappoint. The tour was over 2 hours long, and showed every part of the auto manufacturing process, from metal punching to final drive off. After getting some lunch, we took the subway out to our hotel, to drop off our bags, before heading back out again. We then stopped off at Asamkirche, one of the most elaborate, detailed Baroque era churches anywhere. From the outside, it doesn't looks like much, however the inside is completely over the top nuts. Every surface is covered with paintings, statues, ornate gold, and marble carvings.

After that, it was back to the hotel, for a bit, before heading back out to go on a food & bier tour of Munich. The tour started off at the central train station, with beer tasting, before we got on a train, to a different part of town, and spent the next 4+ hours sampling & learning about different Bavarian beers. It was a fun, informative, tasty experience. We finished off at the famous HofBrauHaus bier garden.

The next morning, we took 2 subway trains, and a tram to the western side of Munich to see Nympenburg Palace. It was quite impressive, although unlike Charlottenburg Palace from earlier in the trip, there was no tour, so we were left to wander from room to room reading a few signs. Also only the first floor of the main palace was open to the public, so it took less than an hour to see everything. We wandered the gardens & grounds for a bit afterwards.

Afterwards, we went back into the center of town to get lunch at the Ayinger Bier Hall, as Denise had a thing for their dunkel (which she actually tried for the first time up in San Francisco a few months ago). The service was absolutely horrible (slow & unattentive), but the food & beer was quite good. One other thing we noticed was that they were cheating almost everyone on the beer pours. Germany is quite strict about beer pours, and 0.5l is supposed to be precisely 0.5l. Denise's mug was maybe a finger width less, and she had to flag down our server to have it corrected. We then observed something similar going on with other customers. After lunch, we went on a walking tour. It was a nice tour, although the group was quite large (more than 20 people), so it was slow moving, and we spent a lot of time waiting for everyone to catch up.

That night we had dinner in an Augustiner bier hall a bit outside the center of the city. The food & beer was pretty good. The following morning we got up super early to catch a 7:10AM train to Berlin. However when we arrived at the central train station, I noticed that our train wasn't listed on the departures board. Turned out that due to ongoing railway worker strikes, they had cancelled our train. After some chaos, we were rebooked on a different train which left about 40 minutes later, and all was fine. The train itself was fairly comfortable, although kinda crowded. The dining car was a bit of a fiasco. Not enough seats/tables, and long waits for food. We managed to wolf down our food just minutes before the train pulled into the station. After that we headed to our hotel for the last night in Germany. Dinner that night was at a fantastic burger joint, called The Bird.

We got up at 3AM the next morning to get to the airport to catch our 7AM flight home. Twenty four hours of travel later, we were home. It was an awesome, fun, spectacular trip.