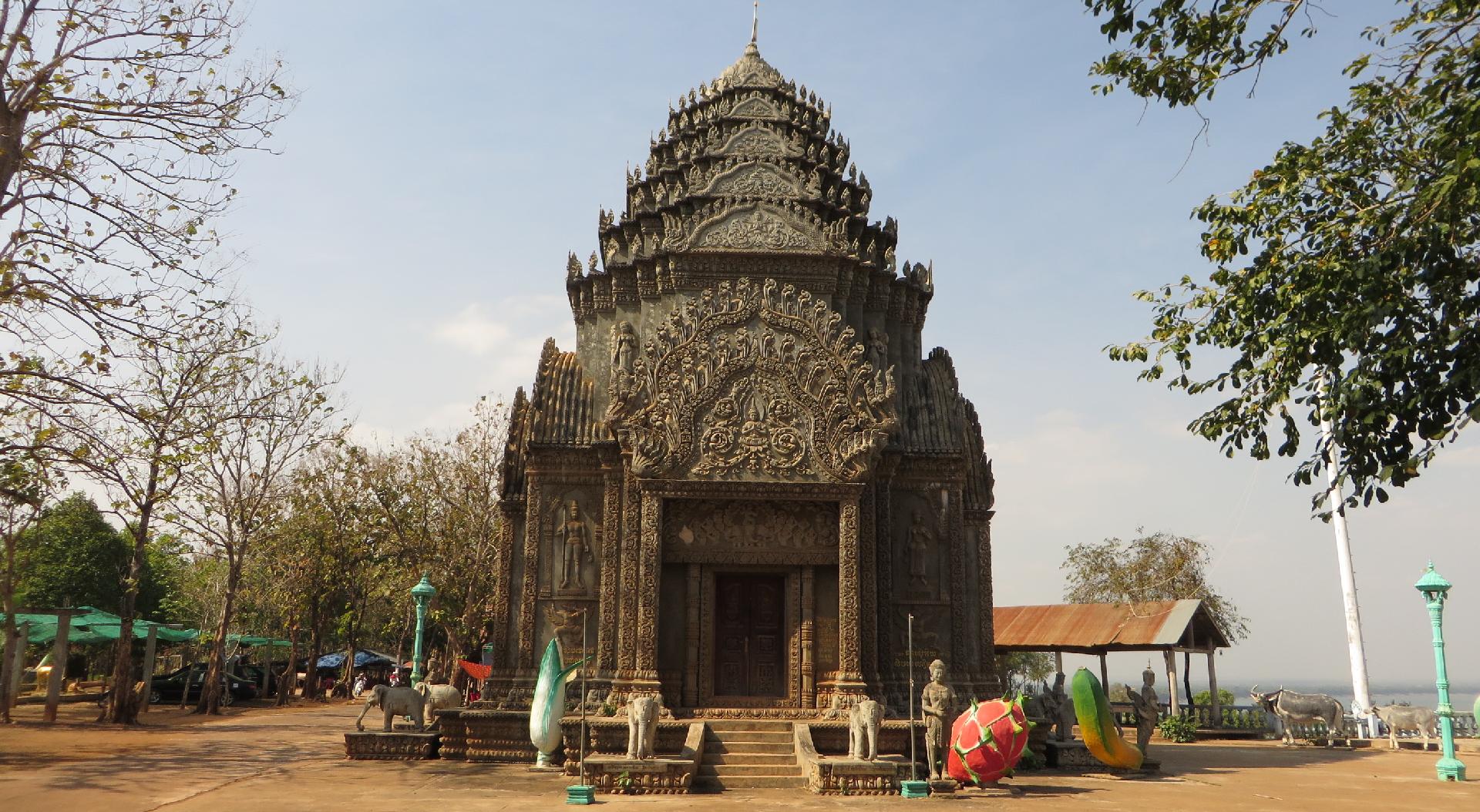 I've just returned from spending two weeks exploring Cambodia. Overall, I had an amazing time, seeing a pretty decent swath of the country. I spent the first half based in and around Siem Reap, and the second half gradually travelling overland to a few small cities northeast of the capital, Phnom Penh.

Day 11
I had a rough night at the homestay/guesthouse. The foam mattress was rather thin, so it felt as if i was sleeping on the ground. On top of that the blankets that were provided were all really small, and even with 2 spread across my body, i had difficulty keeping comfortable. Additionally, the stupid roosters were doing their thing at 2am and 3:30am. Then at 4am, the monks started chanting, which continued until after 5am. At that point i gave for the day, and got up. I packed up my stuff, and sat out side on the balcony, awaiting breakfast. After a bit the girl with the tray started to bring food up to my straw mat. After the dinner the previous night, i was expecting some crazy amount of food, but instead they went the opposite direction. All i was served was tea & coffee, and some french bread. I kept thinking that surely they were going to bring more, but it never happened. I ate what they provided, and paid the woman who seemed to run the place \$10 for the food+bed. I rode my rented bike back to the center of town, dropped it off, and walked across the sand flats to the ferry dock. I missed the departing ferry by about 5 minutes, and ended up standing around for nearly 30 minutes waiting for it to return. The ride across the river only took about 10 minutes, and then i walked back to the kayaking place to return the dry bags, and get my own bags back. I mentioned to the owner the odd behavior of the family, and she agreed that it was quite weird. The kayaking place also runs a small cafe, so i ordered an omelette to compensate for the tiny breakfast earlier. I hung out there for a while, doing email,and killing time before my 11am bus to Kampong Cham. About an hour in advance, i hauled my stuff to the bus station (about a half mile away) and waited for the bus to arrive. Surprisingly the bus pulled up on time, and when i boarded the front 2 seats behind the driver were empty. I must have some good bus karma to get two bus rides in a row with 2 seats to myself. The driver took a very different route back down to Kampong Cham than was taken on the way up, and we arrived in just over 2 hours (it took nearly 4 hours in the opposite direction). As soon as i got off the bus, i purchased my ticket for 2 days from now to return to Phnom Penh, and then walked 2 blocks to the hotel where i'd be staying for the next 2 nights. The hotel is in a quiet neighborhood, and looks quite new.
After getting settled into my room, i decided to go out and explore the town a bit. I walked down to the waterfront, and looked at a few restaurant menus, and ended up ordering a lime mint juice (i still miss those from Oman), and relaxed for a bit. I wandered a bit more, then headed back to the hotel to cool off. Around dinner i headed back to the same area. I ended up getting spring rolls, a stir spicy fry with pork, lemongrass & vegetables and another lime mint drink all for \$7.50. Then i went to a drink place next door and got a cashew milkshake (a milk shake with ground up cashews, not made with cashew milk) for \$1.50.
Apparently the cool thing for teenagers to do here on Saturday nights is to ride around on their motorbikes in packs, giggling and screaming. Speaking of motorbikes, the number of kids that looked to be under 14 driving motorbikes is super scary.

Day 13
I woke up extra early thanks to some stupid retarded rooster and then a temple blasting what sounded like bizarre steel drum jungle music starting at 4am. I walked 2 blocked to a cafe that claimed to open at 6am. While they were technically open, their idea of opening at 6am really meant that no one shows up for work until that time, and therefore, they weren't at all ready for customers yet. I ordered a noodle bowl with fish balls and an orange juice, and then sat and waited nearly 30 minutes for my food. The OJ was actually freshly squeezed, and the soup was decent. They actually gave me 10% off as an apology for taking so long, so my entire breakfast came to \$3.75. After that i went back to the hotel, got checked out and walked the 4 blocks to the bus station. Amazingly enough the bus was already waiting, nearly 40 minutes early. I boarded, and managed to yet again get 2 seats to myself for the entire trip to Phnom Penh. The trip itself was kinda miserable. There was this group of 7 French people in the rows in front of mine who didn't know how to speak with an inside voice. So i heard loud French screaming for much of the trip. Then this Cambodian family with 2 kids (all sharing 2 bus seats) had severe motion sickness, and the kids were violently vomiting for much of the trip. And then there was the traffic & construction which turned what should have been a 115km, two hour trip into 4 hours of hell. We only covered 75 miles for the last 3 hours of the trip. We arrived in Phnom Penh just before noon, and then i had a miserable 5 block walk to the hotel. I really am not enjoying Phnom Penh at all. Most of the sidewalks are completely occupied by cars & trucks, or random stuff for sale, making it impossible to actually walk on them. Its ridiculously loud, crowded and dirty most everywhere that I went. The amount of garbage that I've seen everywhere is beyond disgusting. Anyway, i got lunch, and then hired a tuk-tuk to take me out for the afternoon.
First we went to the killing fields site, which is about 25 miles south of the city center. While i'm sure this was the middle of rice fields 30+ years ago, the city has grown a lot, and today its surrounded by lots of development. Despite that, it was a really well put together experience. Everyone received an audio guide with their admission. The guide had 19 different stopping points, each explaining what took place there during the Khmer Rouge rule in the 1970s. Obviously the entire site was morbid and grim. The guide mentioned that during the wet season, human remains still float to the surface of some of the mass grave sites.
Next i headed back up into the city to S-21, the ex-school, turned torture prison. The site is comprised of 4 three story buildings. My biggest gripe is that there were not very many interpretive signs, and those signs which did exist were not well written. It was still interesting, but it could have been so much better. After that i returned to the hotel.

Day 14
This was the day that never ended. I woke up, got some breakfast and walked 2 blocks to the National Museum. The grounds were pretty with ponds and gardens. The exhibits were almost entirely artifacts from assorted Ankgor sites. Basically anything that wasn't still standing or attached ended up in the museum. It wasn't terribly well organized, but some of the pieces were quite impressive. Of course they ruined it by having an old woman in nearly every gallery selling flowers which could be used as offerings to one of the random Buddha statues. If the museum was free to enter, then I wouldn't have cared, but the fact that they were charging people to enter, and then had what were effectively beggars inside felt very wrong. After I finished up at the museum, I went wandering looking for somewhere decent for lunch. I was quite tired of the generic "Western, Asian & Cambodian" restaurants. All of them had basically the same menus, with the same mediocre food. Eventually I found a place which was just Cambodian food, and a real menu in English. It was slightly more expensive than others, but still reasonable. The food was pretty tasty.
After lunch, I walked over to the Royal Palace. They had a fairly strict, ridiculous dress code, which was completely hypocritical once I got inside. Anyone who had their shoulders or even upper arms exposed was forced to buy a t-shirt to cover up. No one was permitted to wear hats of any kind. Shorts had to be knee length, or they forced people to purchase these horrific purple one size-fits-all pants. Other than my hat, I passed the dress code, and got in. Most of the complex was closed off to visitors. The parts that were open were not terribly impressive, and looked like very gaudy Vegas-style copies of actual Cambodian temples. I saw some of the grounds keepers, all of which were wearing hats. Why are the staff permitted to wear hats, but the tourists had to bake in the heat? Anyway, some of the buildings towards the latter half of the complex were really boring museums, with cases full of random 'treasures' that the king owned. Like a case with several hundred gold & silver miniature elephants.
After the palace, I walked along the river for quite a distance. They actually have a real walkway along the river which wasn't littered with cars or people selling junk, and it was nice to be able to stroll without having to dodge traffic. I eventually found dinner, and then walked back to the hotel. I picked up my bags and took a tuk-tuk back to the airport. My flight back to Seoul left a few minutes late, but I somehow got an entire row to myself. I then had nearly 10 hours to kill in Seoul (ICN). Incheon is an amazing airport. They have 'rest & relax' areas, which have lounge chairs, free hot showers, and are on a separate level from all the gates, where its relatively peaceful. I slept for a couple hours, then got a great shower. I spent much of the rest of the time surfing the internet. My flight from Seoul was long, but otherwise uneventful.

All of the 800+ photos that I took are posted HERE. Note this is the first trip with a brand new camera (Canon SX280), which auto tags photos with the GPS coordinates of their location. If you click the 'Info' link for any picture, you can see the coordinates.